Hello, on October 18th, you’ll be organizing the Dartmoor Vale . Can you tell us where it is located?

The event starts and finishes at Newton Abbot Racecourse (Kingsteignton, Newton Abbot, Devon) where there is ample parking and good facilities. 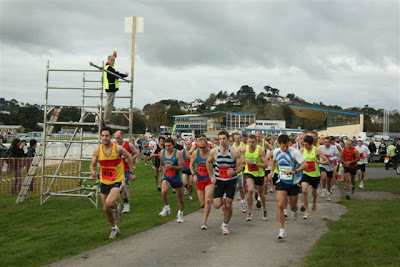 This will be the 7th edition of the race. Why was it created in the first place?

The event was created to raise money for a Rotary charity pledged to eradicate Polio worldwide. We continue to give all the surplus to charity. This year we will be splitting the surplus between charities for whom runners raise sponsorship.

The route is from Kingsteignton up the Teign Valley to Chudleigh, then back along a lovely quiet country lane back to the Racecourse. Runners describe the route as “undulating”, though there is one hill aptly named “Cemetery Hill”.

We are limiting the total entry for the three races to 1,000 and expect to be full. We will be pleased to see any runner, particularly those who are willing to run for charity.

The event comprises 3 road races, Marathon, Half Marathon and 10K, all using some or all of the same route. The Marathon goes round twice. We also have a Fun Run of just over a mile around the Racecourse.

In past years, the weather has been perfect for long distance running, sunny but not too warm.

The event is a lovely day out for the family, as there is an event suitable for all ages and abilities. We do not have any festivities as such.

The marathon finished, what advice would you give a runner who has never been to Newton Abbot before?

A good restaurant, a fancy sightseeing? Newton Abbot is the principal local town and is a good base from which to visit South Devon, with Torquay, the Devon coast and Dartmoor all close by.

In a single sentence, what would you tell the readers of 42k195 to make them register for the Dartmoor Vale?

Every year, feedback tells us that the Dartmoor Vale is a small, friendly, well-organised race – not to be missed!