Burt Trembly has been involved with the Duke City Marathon since 1997, helping the event grow in size and stature. He answered my usual questions.

Hello, on October 18th 2009, you’ll be organizing the Duke City Marathon . Can you tell us where it is located? 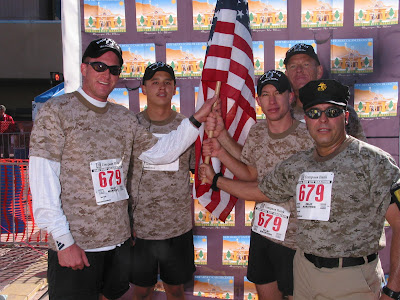 This will be the 26th edition of the race. Why was it created in the first place?

The Duke City Marathon was created to provide a premiere running event for Albuquerque and the State of New Mexico; both as a Marathon, and additional running/walking events.

The course is set along the Paseo del Bosque Bike trail that parallels the Rio Grande River. This is a very scenic course that stays flat and makes for some fast times. The course is USA Track and Field Certified as well as a qualifier for the Boston Marathon.

With six different races this event attracts runners from every skill level and age bracket.

On Sunday during the Duke City Marathon running and walking events, there will be post race festivities on civic plaza, which include a climbing wall and entertainment on stage. Last year over 10,000 people were in attendance at the events and 4,250 were registered for the races!!!

The marathon finished, what advice would you give a runner who has never been to Albuquerque before? A good restaurant, a fancy sightseeing?

Albuquerque is known for its outstanding New Mexican food, which is similar to Mexican food, with its own twist. We would certainly recommend the green chile cheeseburgers at Blake’s Lotaburger! With the event being downtown, visitors are very close to Albuquerque’s Old Town district, which has hundreds of small shops and restaurants, all with distinct New Mexican flavor.

In a single sentence, what would you tell the readers of 42k195 to make them register for the Duke City Marathon?