15 Jul 2009 14:09
Jean-Loup Fenaux
Focus on a race Interview
Gurgaon Running And Living Marathon and a Half!

Hello, on December 6th 2009, you’ll be organizing the Runningandliving.com Marathon . Can you tell us where it is located?

How old is the race, and why was it created in the first place?

The first marathon took place on Feb 22nd along with a half marathon.

We organized a half marathon on Dec 7th 2008. So the event is brand new. We had started monthly 5k, 10k and some 15k runs since June 2007, in the same city. India has just started getting into marathons, but where the organizers are focused on getting numbers of runners and concentrating on the 5k and 7k dream runs which are more like walking carnivals. Having run in 27 marathons across the globe and in India, my start up venture is focused on raising the bar for long distance running events in India for others to follow and improve upon. These are runs for runners by runners.

It is flat, cool, open, devoid of traffic, with greenery still existing on one side and with high rise buildings on the other side. It showcases the growth of Gurgaon . It is a looping course of 14 km which encourages runner interaction, cheering and motivation along the way. Well supported and managed by enthusiasts, we describe this as ‘the coolest marathon in India’. 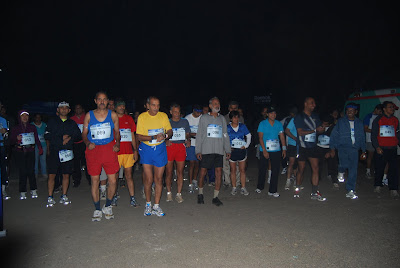 We caped our first edition on feb 22nd to 200 runners and may perhaps take it to 1000 participants by dec 6th 2009 for our 2nd edition. We will get amateur runners from different parts of the country as well as from overseas – we want to make this into a must do on the Indian marathoning circuit.


Do you organize other races during the Week-End? If so, on what distances?

We have set up 30+ running groups in different parts of the country and plan to get this to over 200 running groups – each with at least 100 members so that anyone who want to, can find running company that suits them, nearby, and also build a vibrant running community in India.

We have a run in Gurgaon every 1st sunday of the month which definitely includes a 5 km run and usually a 10k or a 15k too. No runs planned on race weekend however.

It will be cool and dry – starting early in the morning – so starting temperature could be around 45-50°F (4 to 10°C) and the ending temperature 5 hours later could climb to 75°F (24°C). So reasonably variable especially for the slower runners. we have several Aquafina and Gatorade points to keep runners hydrated and several medical stations on the way.

We are planning two bands on the route and a post race dinner party at our partner hotel after the run. 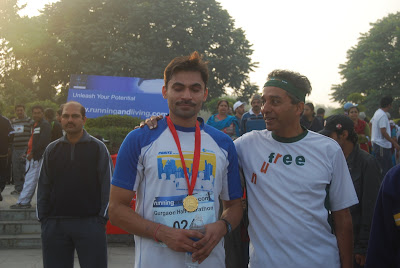 The marathon finished, what advice would you give a runner who has never been to Gurgaon before? A good restaurant, a fancy sightseeing?

Gurgaon is a new city so not much of sight seeing to do apart from taking in the huge contrasts of modern life and building and villages and rural living – the contrasts that make India.

A few places to eat, pubs and discos at the several malls that have come up – cuisines centre around Chinese, Thai, Indian and various American diners.


In a single sentence, what would you tell the readers of 42k195 to make them register for the Runningandliving.com Marathon?

‘Experience the coolest marathon in India – for runners, by runners’.

Gurgaon Running And Living Marathon and a Half!