The race is organized by a Franco-Italian couple. Gianni, Italian from Cesana, ran several of the first editions of the race in 1964. He still takes part in various competitions and brings his experience and knowledge of the terrain. His domains are the definition of the route and all technical aspects of the race.

Nicole, French from Marseille, manages the promotion of the race on both sides of the Alpes : creation and update of the bilingual web site as well as the relations with the 3 town hall.
Nicole answered my questions.


Hello, on August 2nd 2009 you’ll be organizing the Chaberton Marathon. Can you tell us where it is located?

In Montgenèvre, in the Hautes-Alpes department in France. This year, the trail will start in Cesana in Italy (6km away from Montgenèvre) and finishes in Montgenèvre. The route is the same as in 2008 except that it will be run in the opposite direction. 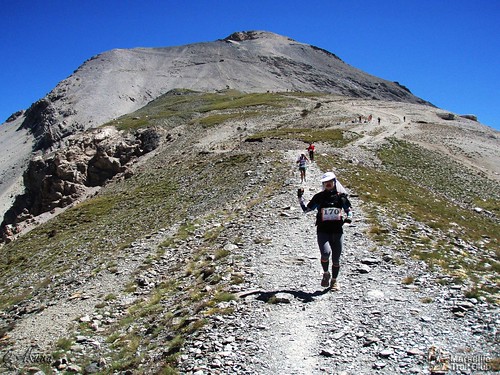 When was the marathon first organized and why was it created in the first place?

The race as we know it today, will be run for the second time. In 2008, we did a test edition (by invitation only) with 20 elite athletes. But in fact, our race is only the modern version of a mountain race that was run on a portion of the route between 1964 and 1990.

This 42k500 mountain race could comme back to live, thanks to the will of the mayors of three villages : Montgenèvre in France, Claviere and Cesana in Italy. The goal was to promote tourism in this cross-border region.

The route only follows mountain trails.

The 5 first kilometers, starting from Cesana are run on a road than on a ondulating trail with an elevation drop of a 100m.

In Fenils begins the climb: 1900m elevation gain on the 8 km that lead to the summit of Mt Chaberton. We follow as much as we can the military trail, but whenever it is worth, the route takes shortcuts.

The route crosses the Pra Claud hamlet at 1600m. There is an aid station at the Granges Quagliet (2000m). It than continues to the pass (2700m) and finally to the summit of Mt Chaberton at 3131m. 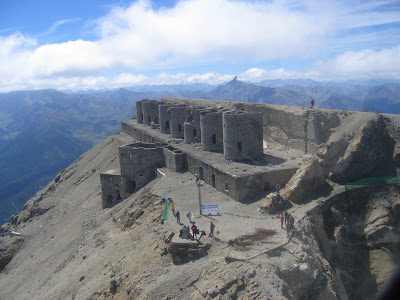 To return to the pass, the route follows the slope, providing a still but fast way down. Runners can still follow the twisting road.
From the pass, where is located a check point, runners have to follow the 1.5km route that leads to the ‘7 fountains’ (2200m). Then 4km of easy way down to Claviere, finish life for the 22km race and aid station with food and drinks.

Crossing Claviere, the route changes mountainside and will offer a totally different vegetation.
The climb in the middle of a larch forest, most of the time, allows the participants to run. In a little more than 10km, following the crest of the border, it leads to the summit of Mt Chenaillet (2650m).

The route follows a geological trail that is worth a lot of attention and respect. In the downhill, runners must follow the trail, despite the temptations. Violations will be punished !

Still following the panoramic crest, the route crosses the Gondran and arrives at the base of Mt Janus. Runners will have to climb the last 250m of elevation and will get a fantastic view of all the distance ran so far. They can be proud of themselves.

The last 5km are a easy and regular downhill. No hurry to get to Montgenèvre.

For technical and security reasons, only 300 runners can register of the 42k500 and an other 300 for the 21k500 race.
Last year 500 runners where on the starting line. We expect to get 600 this year. The early registrations have already began. Most of the runners are trail runners. Last year, this exceptional challenge led some of them to cross France or even to come from Belgium or Spain. 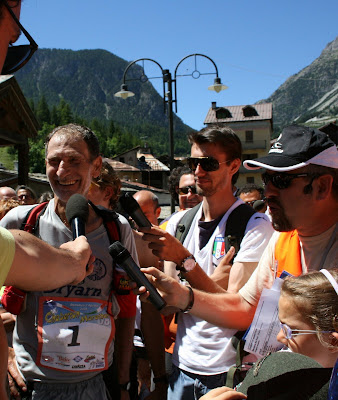 >Do you organize other races during the Week-End? If so, on what distances?

A 21km500 follow the same route as the maratho. It begins in Cesana an hour after the 42k500 and arrives in Claviere (2km away from Montgenèvre).

Good weather, sometimes very hot as in 2008. But as we are in the mountains…

There will be a welcoming party in Cesana on Saturday, just after the runners recieved their numbers and a meal after the race for all participants.

The marathon finished, what advice would you give a runner who has never been to Montgenèvre or Cesana before? A good restaurant, a fancy sightseeing?

The marathon’s route offers a bird’s-eye view of the mountains surrounding Montgenèvre. For the runners wishing to discover the region, I would encourge them to visit the fortifications built by Vauban in Briançon (France) and Exilles (Italy) both less than 20 km away. And why no go for a Pasta jaunt in Italy. Don’t forget that the race is organized by villages that where hosts of the 2006 winter Olympic games. 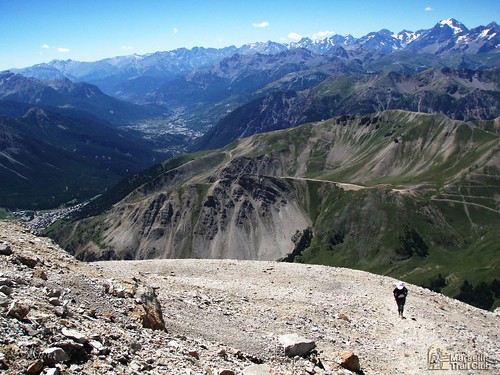 In a single sentence, what would you tell the readers of 42k195 to make them register for the Chaberton Marathon?

Run in a place steeped in history and visit the highest fort in Europe (at 3131m) !

If you need more information :