Michael Nash has been a National Park Service Ranger since 1992. He is also an experienced marathoner who has run many such races in the US. This year he has taken another kind of challenge : organizing his first marathon ; the inaugural Grand Canyon marathon and hopes to make it rank among the most beautiful courses in the world. His challenge this week is to present us this new race which surely looks appealing. 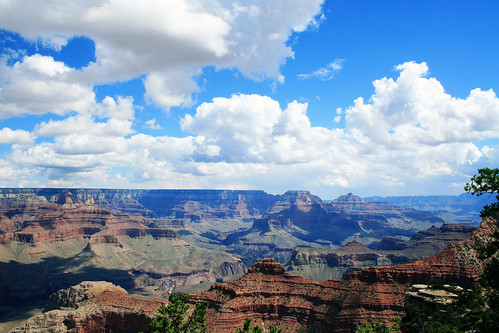 Hello, on November 15th 2008, you’ll be organizing the first Grand Canyon Marathon. Can you tell us where it is located?
The first 14 miles will be along the South Rim of the Grand Canyon following along the historic Hermit Road. At mile 14 runners will head down a main drainage and exit the park on the the Kaibab National Forest through Pinyon One and Ponderosa pine forest.

The final mile of the race will be along highway 64 leading to the finish line at the National Geographic Visitor Center in Tusayan AZ. The entire race is on the southern side of the Canyon at elevations around 7000 feet.

Why was it created in the first place?
We created the race as a community based project to support the Grand Canyon Recreation Center along with a student athlete scholarship fund we intend to create after the race. The initial race concept was a project that I developed through a leadership development program I am involved in.

What kind of route have you set up for the runners? How would you describe it?
This will prove to be a challenging marathon course with significant elevation gain and loss all around 7000’ in elevation (2100 meters). The courses scenery is unmatched and, well …. the Grand Canyon tends to speak for itself!

How many runners do you expect on Saturday morning? What type of runners do you plan to attract?
We limited the race to 300 runners however being our first year we do not expect to reach that number. this race is really for runners who are not after the masses and would enjoy some solitude in a challenging event. We predict that this will attract experienced marathon runners who are looking for something different and challenging.

Do you organize other races during the Week-End? If so, on what distances?
Since this is our first year we are not offering other races.

Weather in Northern Arizona can be quite unpredictable. We hope for dry conditions but expect cool temperatures for the race most likely starting out between 20 and 30 degrees Fahrenheit (between -6°c and -1°C).

Have you planned festivities around the marathon?
There is a pre-race orientation and dinner at the National Geographic Visitor Center the night before the race. Following the race will be an awards ceremony. The South Rim of the Grand Canyon has plenty to offer and visitors can experience it from foot, air, bicycle, boat, mule, train, or car.

Your experience is only limited by your imagination when you enter the four corners region of the United States.

The marathon finished, what advice would you give a runner who has never been to Tusayan before? A good restaurant, a fancy sightseeing?
See our website for the local businesses that supported our event and go check them out.

In a single sentence, what would you tell the readers of 42k195 to make them register for the Grand Canyon Marathon?
It’s the GRAND CANYON!

If you need more information :