Hello, on October 4th 2009 you’ll be organizing the Ferrette Marathon. Can you tell us where it is located?

Our marathon is ran in the South of Alsace (in France), in the foothills of Jura. The start line and the arrival are in the medieval city of Ferrette. 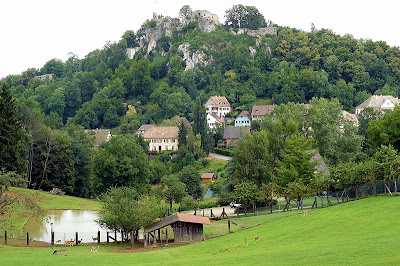 This is the 7th edition of the marathon. Why was it created in the first place?

We had created this marathon by lack of such races in Alsace. Since the end of the Neuf-Brisach marathon, we wanted to offer runners a road marathon but located in a beautiful landscape, in the nature.

Since its inception, the marathon has changed twice to make it faster but none the less pleasant. The elevation gain has gradually been lowered from 600m+ to 380m+, and now, since 2008 250m+.
After an easy first half, the second offers two deceptively flat uphills between kilometer 22 and 30.

Each year, the marathon has between 260 to 300 finishers. They come from 30 different French departments and from 8 to 10 different countries. 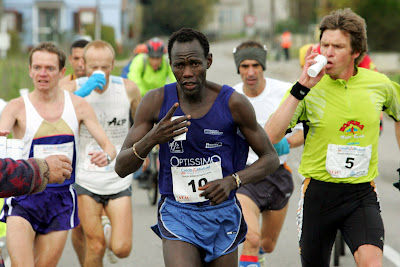 There are two other races on the agenda: a half-marathon ( a new race in 2009) which will start in Lutter (half way of the Marathon) and the 4th edition of ‘La ferrettoise’ a 11,2, km race opened to all runners older than 13.

The race has been organized three times in May and three times as well in November. We have decided to set the date to the first Sunday of October, because the weather is quite good and the autumnal panorama really appealing.

Shows will be organized in the 14 villages the marathon encounters, and at the arrival. The the sports center, a Baeckeoffe is cooked for the runners and their friends.


The marathon finished, what advice would you give a runner who has never been to Liège before? A good restaurant, a fancy sightseeing?

Our region is still neglected by tourists. Sundgau and Alsatian Jura offer a lot of sightseeings and panoramas. The runners should also visits remarkable museums as the Automobile museum in Mulhouse and the Peugeot museum in Montbéliard, which are not to far away.


In a single sentence, what would you tell the readers of 42k195 to make them register for the Ferrette Marathon?

If you want to run a marathon in the nature, on a road where running is pleasant and in a friendly and familly atmosphere, do not hesitate and run with us. We will do our best to make your visit a pleasant souvenir.
As a marathoner myself, I find it much more pleasure running in the nature, than surrounded by buildings or following never ending avenues. But everyone’s different.


Thank you very much Michel